Help this game reach its goal

Mechanesis is the story of sentient Robots fighting a war that isn't theirs. Humanity has expanded throughout the stars and all of their technological advancement has brought them to a new age of warfare. Piloted giant robots have been a staple on the modern battlefield for the better part of a century, but the latest advancement has made this a deadly change of affairs. Now, unmanned artificially intelligent robots are being fielded to turn the tide of the war. 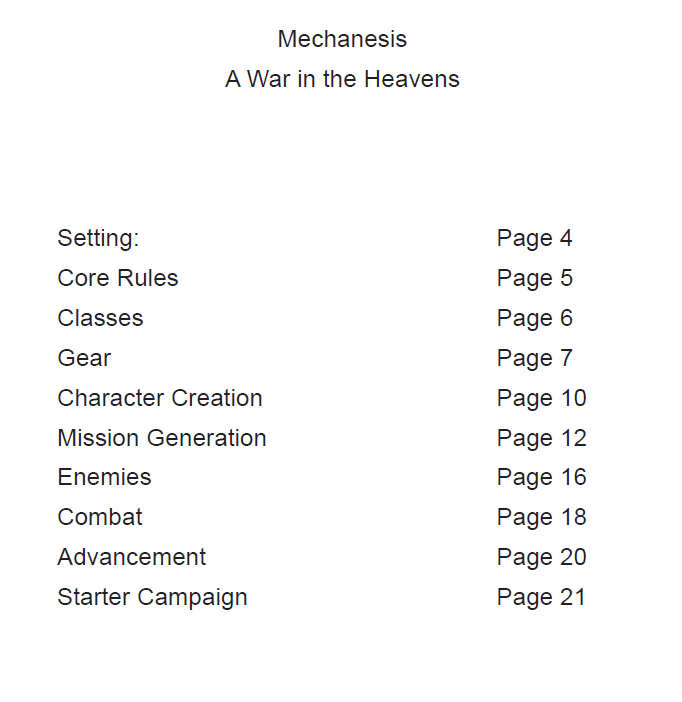 Using a Dice pool system with three stats, you have your choice of Four Classes, two dozen powers, and the system includes a procedural mission generation system.

Also included is an introduction to a campaign, as well as the Turning Point, when the Exo-Frames turn on the EarthGov and fight for the colonies wishing for their own freedom.

At 500 copies sold, we'll get a specialized cover and a professional layout.

at 1,500 copies sold, we'll produce a full length campaign supplement to get you started in this experience.

at 5,000 copies sold, we'll figure out how to do Print on Demand so you can get copies in your hands instead of your tablets and computers

In order to download this game you must purchase it at or above the minimum price of $8.58 USD. You will get access to the following files: